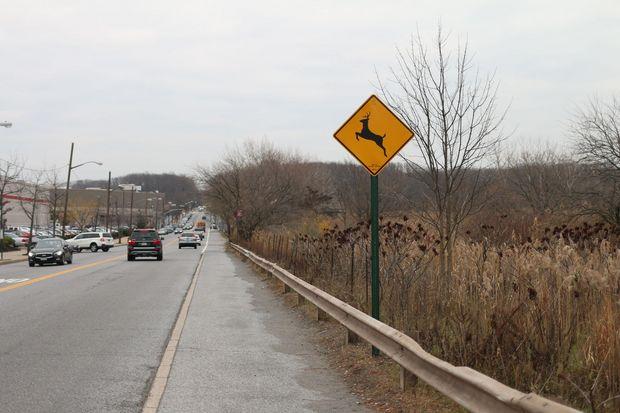 This deer crossing sing, located on Forest Hill Road, near the intersection of Richmond Avenue, is one of 21 signs that the city has installed in 11 corridors to raise awareness of local deer populations among drivers. (Staten Island Advance/Vincent Barone)

Permanent deer signs have been installed on Staten Island at the following locations:

The signage, installed over the course of the first week in December, is located primarily on Mid-Island and South Shore arteries where deer sightings have become increasingly common.

In total, the Department of Transportation installed 21 permanent, yellow warning signs along 11 Island corridors, as reported in the Advance this November. It’s also employing its six temporary variable message sign (VMS) boards to alert drivers to use caution in “deer crash zones.”

Residents’ and officials’ calls for the signs intensified after a 2014 aerial survey found 763 deer roaming Staten Island — a 3,000 percent jump in recent years. (At this point, some ecologists believe there now could be more than 1,000 living on the borough.)

Officials viewed the signage as a quick way to address the growing population, but DOT had to work to establish criteria to govern where deer warning signs would be placed. The department also questioned whether the signs would be effective in increasing driver safety.

This incensed certain officials. Councilman Joe Borelli (R-South Shore), who at the time served as a state assemblyman, threatened to install signs himself in his district. Other residents did just that, posting homemade deer crossing signage on Hylan Boulevard and along Rockland Avenue to warn of the dangers of deer. (The city installed some of their signs close to these DIY warnings.)

Staten Islander Matt Feltus was recently able to catch a member of Staten Island’s exploding deer population on video as a buck ran past him Wednesday on Foch Avenue in South Beach.

Under current guidelines, the city can now install signs on streets that run near parkland or natural areas known to have a high population of deer. The road must also have two documented collisions between deer and motor vehicles.

“I feel great! I’m happy that the signs were installed,” said Borelli.

In addition to traffic injuries, an unchecked deer population could ravage the borough’s parkland and potentially spread tick-borne illnesses.

The city’s interagency deer task force is currently looking at an ongoing U.S. Department of Agriculture assessment of deer management in New York State to determine how the task force will craft a strategy for Staten Island.

Once the federal assessment is completed, anticipated for sometime in February, the city will use that information to craft its deer management plan to be sent for approval to the state’s Department of Environmental Conservation, which regulates wildlife.

“[Sinage] doesn’t detract form the need to have an overall policy for herd management,” said Borelli. “But it does hopefully limit the most serious problem associated with deer — accidents — which have lead to driver deaths in other areas of the country.”