“I’ve lived in the 10312 ZIP code for 33 years of my life,” said Borelli at his press conference on the corner of Arden Avenue and Amboy Road. “And have ben stopped at every traffic light countless times; hit every pothole countless times and have cursed the heavens, like most of my constituents, at all these little, silly inconsistencies that we’re trying to deal with.”

The most minor of Borelli’s requests include signal timing and the repainting of lane striping and crosswalks at select intersections. Bigger-picture points include requesting more right-on-red intersections and the removal of a stretch of the SBS79’s select bus service lane. 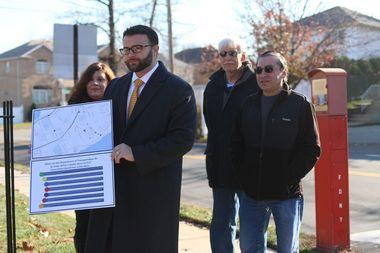 Holding an illustration of his seven-point improvement plan for the 10312 ZIP code, Councilman Joe Borelli (R-South Shore) poses with constituents at his press conference on Wednesday, at the corner of Arden Avenue and Amboy Road. (Staten Island Advance/Vincent Barone)

“These are really just meat-and-potato, simple things that the DOT (Department of Transportation) can do without spending a great deal of money,” said Borelli

In the recent past, DOT has said it generally views the city’s ban on right-on-reds as an integral component of traffic safety and protecting pedestrians’ rights of way.

“I support making right-on-reds legal everywhere on Staten Island, except where DOT says they wouldn’t be safe,” he continued. “If they’re not willing to move forward with me on that, then I’ll ask them to evaluate locations ad hoc.”

“DOT congratulates Councilman Joseph Borelli on his election and we look forward to working with him,” Cocola said. “In the past we implemented his recommendations as Assembly member and we will evaluate his newest set of proposals and continue our dialogue with him.”

Also on Richmond, Borelli is calling for the removal of a .3-mile section of the S79-SBS lane, between Hylan Boulevard and Shirley Avenue. He said that, because of Richmond Avenue’s width, buses haven’t been able to safely drive in the southbound lane.

“It’s a bus lane that even the buses don’t use,” Borelli said. “A bus driver is taught to stay about four feet away from a parked car. You can’t stay four feet away from a parked car while driving in the bus lane at that location. Borough President [James] Oddo and I have been in support of removing this. It’s just a location where a bus lane doesn’t work.”

“The councilman has yet to share his plan with us so we have not had an opportunity to review, and thus, cannot comment,” said MTA Spokesman Kevin Ortiz in an email.